It’s that time of year when my dear cousin, Roger, aka Mr. Corn, and his wife Barb, come to Indiana for a visit. They now live in Florida, where swe

An Herb that Helps Reduce Anxiety, Induce Sleep, and More

I find it fascinating when one single food, or in this case, an herb, can contribute so much to our health. Cilantro is one such herb. While it’s no

National Chocolate Chip Cookie Day may inspire some baking… While preparations have begun for those going back to school, there’s still lots of su

A Summer Meal with a Kick

While many of us would like to add more vegetables to our diet, it can be challenging to come up with new ideas. Discovering main dishes that are vege

These vegan tacos have a kick, so if you’re not a fan of spicy foods, cut back on the cayenne or omit.  Serves 4 Ingredients 1 lb. mixed mushrooms

Are They Eggs or Just Eggs?

In an effort to help those who are allergic or choose not to eat chicken eggs, this blog’s for you. And if you love chicken eggs, biscuits and gravy

Lipstick on a Pig

For any of my new blog followers, cauliflower is one of the few vegetables that I’m not fond of.  I’ve tried it all sorts of ways. Readers have s

After rinsing the head of cauliflower, cut it into florets, remove the thick stem portions, and slice it very thin. Arrange in a single layer on a sto

admink
Everything Else, Recipes

In case you haven’t noticed, it’s still possible to find Vidalia onions in local stores. I’m not sure how long they will last, so now is the tim 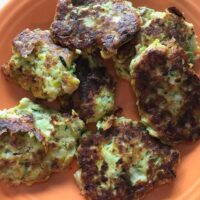 Make patties from the mixture. Heat about 2 Tbsp. oil in a skillet. When hot, gently drop the patties into the oil (medium heat), flatten with a spatula and let cook until nicely browned on both sides. Remove and drain on paper towels.

For the Love of Leeks, and Hot Cakes

It’s the week of the leek. From the looks of the leek I have in my fridge, it’s a good thing that at week #38, baby is about to make his grand worldly entrance.

Pictured, is me holding a typical leek. Yes, it resembles a giant green onion. 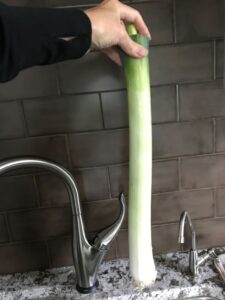 Leeks belong to the same family as onions, chives, scallions, garlic, and shallots.

They have a mild, somewhat sweet flavor, and acquire a creamy texture when cooked.

The first time I took notice of the leek, I was in San Francisco trying to dine at Postrio, a Wolfgang Puck restaurant. There was no way to get in for dinner, so we sat at the bar and ordered a leek and shrimp pizza.

I immediately worked to recreate it when I returned to my kitchen. I came up with a Chèvre (goat cheese), Leek and Shrimp Pizza that was pretty tasty. That was about 30+ years ago. Postrio closed in 2009.

As luck would have it, I found a fairly simple “comfort food” leek recipe to share. I’m planning to make it Friday to accompany my fish.

Of course, leeks are very nutritious, extremely low in calories, and very versatile, like onions.

The greatest adventure in working with leeks is cleaning the mud out between the layers. This step is critical so that you don’t find dirt or grit in your dish.

To clean them, cut off the hair-like end and most of the tough green parts from the other end. Then slice them in half, from top to bottom. Fan out the layers and rinse under running water to remove any dirt or grit.

Another way I’ve done it is to cut off both ends as above, then chop so that I have rings of the leek, the same way I’d cut a green onion. I then separate those leek ringlets in a colander and rinse well.Choose whichever way is best for your recipe. 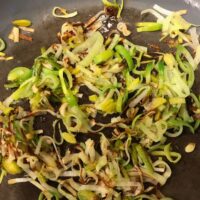 There are many ways to use leeks: in tarts; potato and leek soup (a classic from Julia Child); sauté and top your pizza or burger; roast with other veggies; add to pasta; any way you’d use an onion.

Make patties from the mixture. Heat about 2 Tbsp. oil in a skillet. When hot, gently drop the patties into the oil (medium heat), flatten with a spatula and let cook until nicely browned on both sides. Remove and drain on paper towels. (Recipe derived from nodesserts blog)

“Labor is the only blind date where you know you will meet the love of your life.”–babycenter

Swiss Chard, Your Refrigerator, and Advice from Julia

As we close in on this journey at week #37, baby is the size of a bunch of Swiss chard.

Swiss chard falls under the extremely nutrient dense umbrella of dark, leafy greens. Kale is often thought of as king of the kingdom; however, this vegetable is so impressive, I think it knocks kale off the throne.

For starters, it tastes better. Swiss chard is not as bitter as kale. The stems are slightly sweet and have a similar taste and texture to bok choy stems. Chard leaves are mild, like spinach. 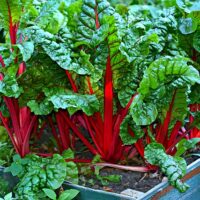 Next trip to the grocery, Swiss chard is coming home with me. I’ve not been tuned in to this great green prior to our journey through the baby development garden.

Speaking of gardens, it can grow in poor soil and has a low requirement for water and light. There are something like 45 varieties (who knew?) with assorted stem colors that would brighten up any meal.

Ways to Add Swiss Chard to Your Life

Time to Spring Clean Your Refrigerator

Unless you do this on a weekly basis the day before garbage day, now is a good time to clean out your fridge. It can be quite a rude awakening to discover a scary experiment or two growing in a hidden corner.

Toss any outdated items and mystery sauces hiding out in those take-out containers and packets. Wipe the drawers, shelves, and sides of the internal compartment with a mild solution of your dish soap and water or mix a solution of one-part baking soda and seven parts water. Stay away from commercial cleaners that could transfer scent or chemicals to your food. 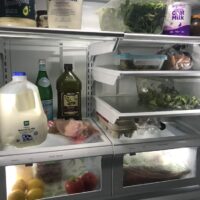 If the thought of cleaning out your entire fridge feels like too much at once, break it into smaller projects. It may be easier to clean out a couple shelves or compartments a day. You may even feel inspired to move on to the freezer.

When you restock, stick with as many fresh whole foods as possible. Beware of foods with mile-long ingredient labels that you need cheaters to read. Use this opportunity to expand your vegetable wardrobe, starting with a bunch of Swiss chard.

Could you use some help getting back on your fitness track? Working your plan and still feeling stuck? Have you had success with a restrictive eating plan or diet and need help transitioning to a more varied menu?

Email me today. Those sizzling summer fashions are waiting for you.

“You don’t have to cook fancy or complicated masterpieces—just good food from fresh ingredients.”—Julia Child

It is week #36 for baby and he is the size of a head of remarkable romaine lettuce. Yes, if I haven’t mentioned it before, my friend will soon be the mom of a BOY!

Some may think that romaine is as low in nutrients as basic iceberg lettuce– which is not that exciting to the health-conscious world.

Romaine is a good source of vitamins A and C. When it comes to greens, the darker green, the more nutrients, so it does lag behind some other leafy counterparts.

Famous for its crunch, some of the best salads are those that combine the dark green goodness of spinach or kale with romaine. They all get along famously in the bowl. 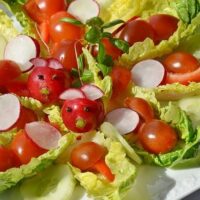 Top benefits of romaine include:

*Helps maintain a healthy pregnancy (due to folate)

*May aid with weight loss

Obviously, this is another great vegetable to add to your vegetable crisper and to your diet. The most nutrient dense parts are the green leaves. The stalks add the crunch. 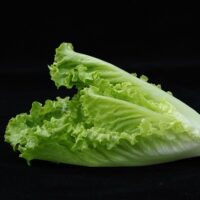 Besides eating romaine in a salad, the enormous leaves make a great sandwich wrap for those who prefer to eat less bread. They add a nutritious crunch to a regular sandwich too.

Add to your smoothie (you won’t taste it) or try grilling or roasting it for a unique flavor.

When choosing your romaine, look for leaves that are sturdy and not brown or yellow. Organic is preferable when available, since it’s easy for the leaves to absorb chemicals and pesticides.

Romaine will keep 5-7 days in your fridge.

How are you today? Really.

Yes, REALLY. How well (or not) are you doing life these days?

There’s a Deep Health Questionnaire that goes surprisingly—deep. When we’re looking to lose weight, have more energy, and enjoy life, there’s much more that determines the outcome than just the food.

Please don’t misunderstand. Food is foundational. And then there’s more…

A few questions from the questionnaire:

Perhaps, depending on how you answered the sample questions, you may do well to carve out 10 or 15 minutes of quiet solitude each day. Many people are bombarded with noise and never allow time to consider what is happening in their lives.

All of this affects your weight, health, and ability to fight off illness.

Now is a great time to begin.

“I went to the woods because I wanted to live life deliberately.”–Henry David Thoreau