Corn on the cob is one of Mr. Non-Compliant’s (aka my husband’s) favorite foods. Indiana offers the best, come late July and August.

The rest of the year, I sometimes find pretty tasty corn in the grocery store. This past week I discovered some at Whole Foods for 50 cents an ear and decided to splurge on this starchy treat.

Mr. NC was happy, until he experienced a corn on the cob holder incident. As he was eating his nicely buttered and salted ear, the holder slipped off the end of the corn and bit him on the cheek. 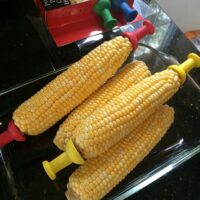 Fortunately, he didn’t require stitches and lost only a small amount of blood. He has recovered quite nicely.

I’ve threatened to take those dangerous corn aids away from him. Maybe I can find some with rubber tips in time for corn eating high season. 🙂

Eat at your own risk.

The Wonder Drug That Isn’t

I have a friend who had to forfeit her exercise regimen this past year due to a variety of circumstances.

To make matters worse, her love of sugar and other not-so-nutritious foods had scored a starring role in her diet.

And then, she found her way back. She’s now working out 4x a week on her best weeks, and twice a week when things don’t quite go as planned.

She has less pain, more energy, and feels healthier. Because she’s moving again, her diet is improving too.

Getting back into her exercise routine has improved her quality of life, and she hasn’t even been focused on changing her food.

Exercise is life changing. If it could be put into a capsule, it would be the most widely prescribed drug on the planet. 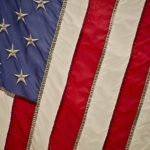 If your routine isn’t where you’d like it to be, today is the perfect time to begin. You’ll feel better tomorrow.

Have a blessed Memorial Day weekend.

“I believe our flag is more than just cloth and ink. It is a universally recognized symbol that stands for liberty, and freedom. It is the history of our nation, and it’s marked by the blood of those who died defending it.”- John Thune