A large eggplant. That is the vegetable size of a baby at week #28.

Oh, but wait just a minute. An eggplant is actually a FRUIT because it grows from a flowering plant and contains seeds. I just learned this.

There are many eggplant varieties that range in size and color. The deep purple skinned variety is the most common.

Eggplants contain a good amount of vitamins, minerals, antioxidants and fiber, while being low in calories. It’s another good fruit to add to your repertoire. (I still keep thinking of it as a VEGETABLE.)

That being the case, they may help with weight loss. I’ve never had a client tell me that they gained a few pounds over the holidays because they ate too much eggplant. 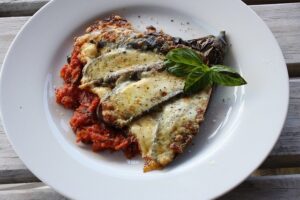 Watch, I’ll get a call later today on that one.

At any rate, if you’ve never tried eggplant, or think you don’t care for it, you may want to experiment with a recipe or two. Fine Italian restaurants typically make fantastic Eggplant Parmesan.

Here’s a recipe from Dr. Perlmutter’s The Grain Brain Cookbook. I’ll be making it tomorrow in a kitchen coaching session with one of my clients. We were looking for a vegetable lasagna recipe, and this fit the bill. We’ll see what happens!

¼ cup extra-virgin olive oil, plus more for greasing the pan

Preheat the oven to 450 degrees F. Line two baking sheets with parchment paper and set aside. Lightly coat the interior of an 8-inch square baking pan with olive oil and set aside.

Using a pastry brush, lightly coat both sides of the eggplant and zucchini with olive oil. Place the vegetables on the prepared baking sheets and season with salt and pepper to taste. Place in the preheated oven and bake until just barely cooked and lightly browned, about 12 minutes. Remove from the oven and set aside to cool. 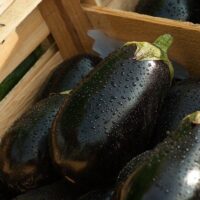 Bake until hot throughout and the cheese has melted and browned slightly, about 30 minutes. Remove from the oven and let rest for 10 minutes before cutting into squares and serving. This is also tasty at room temperature, making a perfect lunch the next day.

To your health,
Carol

“The simple act of moving your body will do more for your brain than any riddle, math equation, mystery book, or even thinking itself.”― David Perlmutter, “Grain Brain: The Surprising Truth about Wheat, Carbs, and Sugar—Your Brain’s Silent Killers”